The Woman’s Hospital Of Texas Announces Identical Twins Give Birth To Their Babies On The Same Day!

Karen arrived at the hospital on Wednesday, June 17, thinking that she might be in labor.  She was not due until July 31 and when she thought she "might" be having contractions she called her sister to accompany her to The Woman’s Hospital of Texas. Kathy, due to deliver on Saturday, June 20, was to be Karen’s "support" person in labor. Doctors determined Karen was in the beginning stages of labor. While Karen was in labor, Kathy began to experience labor pains of her own. The doctors examined Kathy to discover she was 5 cm and definitely in labor. The twin sisters were delivering their babies within hours of one another. 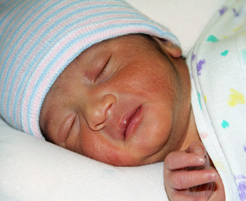 About The Woman’s Hospital of Texas

The Woman's Hospital of Texas opened in 1976, and has remained the state's premier facility dedicated to the health of women and newborns. With the recent addition of the Pediatric Center, the hospital has expanded that level of high-quality care to include their youngest patients. Located near the Texas Medical Center in the heart of Houston, The Woman's Hospital of Texas offers 397 licensed beds, including a Neonatal Intensive Care Unit (NICU). With more than 650 board-certified physicians, The Woman's Hospital of Texas offers expertise and an outstanding level of care in breast health, imaging, gynecology, obstetrics, high-risk pregnancy and minimally-invasive surgery. The Woman’s Hospital of Texas is accredited by The Joint Commission. It has been recognized as a Center of Excellence in Minimally Invasive Gynecology (COEMIG), as a NAFC Center of Excellence: Continence Care in Women and is a designated Baby-Friendly Facility. For more information, visit our website at www.WomansHospital.com.

HCA Gulf Coast Division is a comprehensive network of hospitals, outpatient surgery centers, emergency centers and diagnostic imaging facilities.  It offers a complete continuum of specialized health programs and services that meet the needs of Greater Houston and South Texas’ residents and businesses.  HCA affiliated facilities in the Gulf Coast Division include: 13 hospitals, 8 ambulatory centers, 6  off-campus emergency centers, and a regional transfer center that provides one-phone-call access and support for patient transfers into and out of the HCA Gulf Coast Division Affiliated Hospitals, as well as access to ground and air transportation within a 150-mile radius.  For more information, visit our website at www.HCAGulfCoast.com.